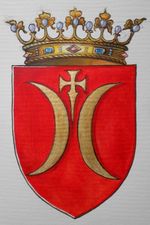 Błociszewski - old line of the Ostoja family, origin from ancient nobility, family of knights and Lords. One of the most distinguished and noble families of the Commonwealth holding exceptional number of heroes fighting in the name of the liberty of Poland, men and women. Early documents tell about Jakusz de Blociszewo was Duke of Lviv year 1370 and Mikołaj, Castellan of Santok 1406-1414 and of King's most trusted diplomats. Family name origin from the property of Błociszewo in Kościan County. Gajewski de Gaj of Ostoja origin from this family as well as Ostoja families of Roguski, Lubiatowski and Czernikowski.

History of the family

The owner of Błociszewo in 1358 is the Knight Jakusz of Ostoja coat of arms . From the year 1370 comes his famous seal when he was the Duke of Lviv. In the year 1393, Błociszewo is noted as property of knight Mirosz, the judge of Poznan county. In the year 1408 the brothers Jan and Mikołaj Błociszewski built parish Church in Błociszewo with the permission of the Wojciech Jastrzębiec, the bishop of Poznan.

On the property of Gaj that belonged to Błociszewo, Wincenty Błociszewski - due to document of the national community - change his surname in year 1540 and created new line of Ostoja. From that year, this family call themselves Gajewski from Błociszewo. At the end of 16th century and early 17th century, Błociszewski family have had very prominent representative - Jan Błociszewski, the judge of Poznan county and deputy of diplomatic mission to Hungary during the reign of King Sigismund III Vasa. During the time of Zebrzydowski Rebellion he support the King and hold Greater Poland loyal to him. He goes with the King on the war that has started when Dymitr Samozwaniec was killed. Fighting bravely with the enemy, he dies on the battlefield in the battle of Moscow.

Franciszek Błociszewski was the Chancellor of College of Krosno and Sandomierz, a Jesuit. Due to his loyal service, he recieved nomination as Vice Voivode of Poznan (1746-1748) and become Lord of regality of Grójec. Tadeusz was General Major of the Polish Army, cavalier of Saint Stanisław's order and received the Order of White Eagle in year 1791. He participated in the General Confederation and Constitution of 1792 as a Deputy of Łęczyce. Brothers Kazimierz and Tadeusz Błociszewski where fighting in the Uprising year 1848, both become wonded, first of them loosing a leg and the other one his arm during the Battle of Mirosławiec and in the Battle of Książ. Both emigrated later to Paris. Kazimierz is the author of six-volume work of Historia Powszechna.

Major Stanisław Błociszewski - Lord of Smogorzewo, Ciołkowo, Sobiesiernia and Rogowo, officer of Polish army from 1831, cavalier of the Golden Virtuti Military Cross, took part in the Uprising year 1848 and in year 1863. Jan Błociszewski was a canon and founder of a Chapel in Rome.

Well-known representatives of the family 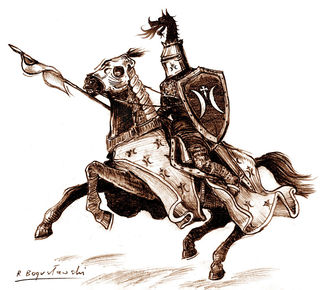 Members of the family