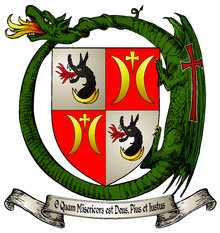 Goals of Association and future Foundation

The Ostoja Clan Foundation will work in the field of charity and education and care about health and social welfare of the society. We encourage art, science, ecology being historical-cultural organization that combines social activities of its members living in Poland and in foreign countries.

The organization works for:

Moral and ethics of Ostoja Clan

Ostoja coat of arms contain a cross, which resembles the Christian values ​​referring to the person with free will and free mind, tolerant, progressive och with compassion. The power and wealth of Europe is standing on christian values ​​and destruction of these values destroy European identity and its future - more in this link: our Heritage and Diversity.

Starting from the genius of Stibor of Stiboricz, Mikołaj Błociszewski or Ścibor of Poniec in the Middle Ages, Ostoja families seek to educate younger generation to broaden their mind and skills that showed to be very important for development of the society and Commonwealth as well as for Europe. It was not by power and sword that powerful stronghold of Malbork was conquered but but intellectual power, tactics and great diplomatic work.

Unity has always been and is the strength. Unity is built on shared values ​​that unite. During centuries, it was common that influential Clan members helped less influential members acting in a way of One for all and all for one. Loyalty to the Clan and Poland is well illustrated in the example of Mikołaj Bydgoski of Ostoja, who preferred to loose all his fortune and titles in Upper Hungary (Slovakia) before his devotion and loyalty to the Crown in the Battle of Grunwald. Also, the character of Kacper Karliński and the defense of Olsztyn show the attitude and the sacrifice that was necessary for keeping up the unity and loyalty - which always have been part of Ostoja.

4. Humanism - in its full sense of scale

Members of the Clan have been building churches since 13th century, raising temples of faith. They also traditionally build schelter for poor, sick and old providing help to those in need. Over many centuries, the tradition has always been what Caritas do today, although not in same scale. Cardinal Adam Kozłowiecki's work as well as of Karola Uniechowska represent Ostoja well in this context.

Ostoja has always been a mainstay of Poland and Commonwealth - steadfast as Hussars. The morals of the Hussars where the one that defended Commonwealth and its position in Europe but as the morals fell, also the Nation suffered and it led to the partition of the Commonwealth. Ethics and morals are the ground for the survival of the society and it is integral part of humanism, which recognizes the value, dignity and autonomy of each individual and their inalienable right to self-realization in the society. Commander Wacław Krzywiec and his life story represent well this so important value. This case show part of the morals that kept Commonwealth alive for so many centuries - Conspiracy of Commanders.

The genius of Ostoja is not linked to any century or special condition, it have always been present. Presenting just few of many of them like Michał Sędziwój, Kazimierz Siemienowicz, Adam Ostaszewski, Jan Czeczot, Teofil Wojciech Ostaszewski, Mieczyslaw Karłowicz, many professors of Jagiellonian University, Kazimierz Zagorski, Joseph Stanislaus Ostoja-Kotkowski just to show outstanding values of Ostoja that led to such innovation and creativity and that present development of society when there is room for education and freedom of the mind, wisdom and prudence.

Respect for the right of every single person to his own views, beliefs and preferences. In terms of tolerance and pluralism, Ostoja present remarkable person, Ignacy "Redux" Ścibor-Marchocki . It is not without reason people in Ukraine raised museum in his name to keep memory of this person alive for many generations to come. Ignacy was truly representative for Ostoja and what it stand for.

Over the centuries, Ostoja was not only mainstay of the Commonwealth in all aspects and area but was also defending issues connected to justice that is a backbone in every society. They where Righteous Among the Righteous. Hundreds of Clan members hold high positions in the society with right to judge and uphold justice. They where governors offices, Castellans, Lords of Regality and Judges. There are numerous documents that tell about the wisdom and justice with which Clan members ruled and fullfiled their obligations in Poland, Lithuania and Belarus and even in Transylvania and Slovakia (Hungary). The law is the backbone of the society, and when it does not work, it leads to the collapse of morality and in that way also entire Nation.

For most of the Clan members as well as for many Poles, freedom was regarded as the highest value, higher than own life. Without such an attitude, Poland would not be a free Country but would most likely not exist anymore on the map of Europe. In this respect, one could cite hundreds and thousands of Clan members who fought and gave their lives so that we can live today in free Country and with full rights for individuals. Today, freedom is taken for granted and something normal, but this was not the case for ancestors of the Clan.

Examples of patriotism in Ostoja are so many that it would be necessary to write several books about it. Patriotism is not only dedication but working for the good of our society. Patriotism of Emma and Maria Ostoja Ostaszewska is something normal in Ostoja just as dozens of memoirs and diaries of ancestors. Patriotism is based on a sense of social ties, the cultural community and solidarity with their own people and the community and it is related to the protection of their cultural heritage. Patriotism is the opposite of chauvinism and nationalism and the essence is respect for other peoples and cultures.

Statue of the Ostoja Clan Association in polish language

Below links to sub-pages about Annual Clan Meetings.

* Constitutional meeting of the Ostoja Clan Association, summer 2012 at Ostoya

In this section we post announcements for our Clan members. To help each other and interact is central part of the integration of the Clan.