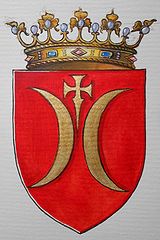 Danielewicz vel Danilewicz - one of the oldest Lithuanian families of Russian origin, ancient nobility and knights that joined the Clan of Ostoja in the first half of XVth century. Dawid, son of Daniel was the first to use the name of Danielewicz. Dawid was judge of Vilnius around year 1450. In early documents as for the position of the family members with power of judging there where barones.

It is not known in which way the Danielewicz family started to use Ostoja coat of arms. Either family was adopted to the Clan in the begining of XV century or they took part in Clan society earlier as there are several families in Ostoja that joined forces of Ostoja. Here, Ostoja was a battle cry for all that was part of this military group.

There is no information about origin of Daniel, some historians think that Daniel participated in Union of Horodło in 1413 and there was adopted to the Clan of Rola. This theory is however not likely to be true.

The DNA of Ostoja Danielewicz (Z92, yp682) show Slavic or Sarmatian origin, north east group that is typical for Lords and Boyars in this area like Eysmond family with Korab Coa and Rudziecki, probably of Ostoja. Those families lived in Russian land that Lithuania overtook. Later, in 13-14th century, many other families of Russian origin joined Lithuanian forces being in opposition to Moscow. 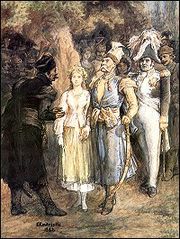 According to the records, Daniel had two sons and one daughter. Of them, Dawid was the first to use surname of Danilewicz which is very natural since it means son of Danil. Dawid was judge of Vilnius which also show that family was respected at that time.

According to Boniecki, Iwaszko Iwanowicz Danielewicz was serving at Royal Court during the time of Sigismund I the Old (pl: Zygmunt I Stary, lit:Žygimantas II Senasis) that also gave Iwaszko villages of Nieżylowy and Teszyłowy in Markow county year 1511. Iwaszko had a brother Fedor that also served at Royal Court 1523. Both contributed with 3 horses to war campagnes.

In 1530 Michał Danielewicz was in possession of 10 villages with different economic buildings on the property. His grandson, Jan Karzimierz Danielewicz was deputy to the Sejm from the Vilnius district.

Paweł Danielewicz voted with Vilnius voivodship for John II Casimir (pl: Jan II Kazimierz Waza) in election, he was Judge and Lord of regality (Starosta) of Intursk in year 1663. His son Adam Karol was Judge of Vilnius, died in 1686. His wife, Leonida Konstancya von Hertzdorf discussed with the Sapieha family about the dept that Sapieha family had to father of Adam Karol, Paweł Danielewicz.

Next generation of the Ostoja Danielewicz family is noted, Jan Hieronim , Paweł Jerzy, Mikołaj and Roman, of them Roman was first steward (podstoli) of Oszmiany and later Lord of regality of Intursk and the Chamberlain of Oszmiany. Mikołaj was Sword-bearer (miecznik) of Wilkomierz and later deputy of Lord of regality (podstarosta). All of them signed for Michał Korybut Wiśniowiecki in election of the King. Voting for Wiśniowiecki was more voting for his father, nobody then knew that the son of great Jarema Wiśniowiecki would be such a catastrophe but it can be assumed that the Magnates of the Commonwealth wished to have totally incompetent ruler that served their interests. In this time, families of Radziwiłł, Zamoyski, Pac and Sapieha ruled the Grand Duchy of Lithuania.

Roman, the Chamberlain of Oszmiany signed for Jan III Sobieski in his election as the King. He was married to Katarzyna Pac, daughter of Heronim Domink Pac, son of Piotr, the Voivode of Troki, their son Michał was adopted by Katarzyna Pac's oldest brother since he had no own son's and with that, the possessions of Piotr Pac and Tekla Wołłowicz past in most to his possessions to the the family of his daughter, additionally Roman Danielewicz bought the town of Korciany from the the Voivode in 1680. The couple had a doughter Teresa that married to Krzysztof Sulistrowski, Marshal of the Lithuanian Confederation 1716-1717, and sons Piotr, Kazimierz and Michał.

This line of Danielewicz will through next 100 years be one of the most prominent families in the county of Plotelsk.

Piotr Danielewicz, son of Roman Danielewicz and Katarzyna Pac attended year 1691 to Academy in Vilnius, records tell about Piotr's wisdom and knowledge. In the testament of year 1710, Katarzyna Pac name Michał that was the Lord of regality of Plotelsk and appointed by the Sejm to commissar of the Hungarian boarder. Michał married to Eleonora Zenowicz, daughter of the Chamberlain of Połock. She also name her son Kazimierz.

Eleonora and Michał had three son's, from which there are three lines:

Katarzyna Szwejkowska married to Jan Danielewicz, had son's Michał Jakób and Franciszek, with second wife Tekla Mackiewicz he had son Tomasz, born 1794. Wincenty Danielewicz, born 1830 and Jan, son of Tomasz and Franciszka Karnicka, born in Widze 1819 was registered in the books of nobility of Russian Empire in year 1856.

Other lines of Ostoja Danielewicz 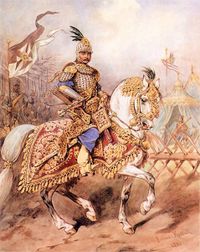 Samuel Danielewicz - Rittmeister of Braclaw gave property of Wodopol (Tułowo) to his son Jan. Jan with his wife Lucyna Białonowicz gave property to their son Onufry, the captain of Royal forces. From this line, Dominik Danielewicz married to Katarzyna Zborowska and had two son's - Wincenty and Antoni. Of them, Wincent married Konstancya Podskoczym and had five sons with her. His brother Antoni married Anna Ostrowska and had four son's with her. of them, Wincenty married to Karolina Horodecka and had a son, Sylwester Mikołaj, born in Kozince 1840. Another son of Antoni, Michał married to Teresa Marcinkiewicz and had a son, Wiktor, born in Putreniszki 1847. Stefan married Antonella Rogowska and Józef married Donata Niemiro of Jastrzębiec Coa and had two sons, Antoni born in 1855 and Julian born 1860.

Michał, grandsonson of Jan and son of Onufry Danielewicz married to Urszula Grzybowska, they had five son's. Of them Józef Antoni married to Bogumiła Kozłowska and had three sons. Antoni married to Zuzanna Truskowska and they had two son's togehter, Adam Michał born 1843 and Piotr, born 1854 in Janopol.

Wincenty, son of Tadeusz had two son's; Jan Franciszek and Jakób, owners of property Krupieliszki (Walkinie) until year 1834. Józef, son of Tadeusz was owner of the property Jodzienie-Szłowiany 1777.

In 1653 the property of Bohdanów named after Prince Bohdan Sapieha in Belarus were passed to Barbara, daughter of Prince Karzimierz Sapieha. Barbara's daughter Tekla Wollowicz then married Piotr Michal Pac and the property passed to the Pac family. Since Piotr Michal Pac had no children of his own, he adopted Michal Danielewicz,(Starosta of Plotelsk, Inspector of the Hungarian boarder) into the Pac family as he was the son of his sister Katarzyna Pac, daughter of Piotr Pac, Voivode of Trakai. As result of that, the Bohdanow property among others was passed from the Pac family to Danielewicz.

During the Partitions of Poland or Partitions of the Polish–Lithuanian Commonwealth 1772-1918, Danielewicz's participated in many upraising actions witch cause Russian side to confiscate most of the family properties. As the family did not support foreging forces in the Commonwealth and was in opposition, no offices was given to the family anymore. In the end o 18th century part of the family moved to Preussen where they joined Prussian army as officers in hope to fight Russian side that was holding control of the east part of the Commonwealth. After the Napoleonic wars, Marcin Danielewicz received the Order of the White Eagle for his efforts in the fight for the independence of the Commonwealth. Józef Ostoja Danielewicz was lieutnant during January Uprising and received order of Virtuti Militari, he died 12th of september 1887. Jan Danielewicz died on the fields of Olszynka Grochowska in November Uprising, Piotr Danielewicz participated in 1863 Upraising in Vilnius (the January Uprising) and after the uprising failed, he was sent to Siberia from witch he never come back.

As the consequence of the January Uprising, 80.000 people was deported (according to professor Norman Davies, Gods playground, History of Poland, Oxford university Press 1981) witch is the largest single deportation in Russian history. Whole villages and towns were burned down; all activities were suspended and the nobility, was ruined by confiscation and exorbitant taxes. In 1905, 41 years after Russian crushing of the uprising, the next generation of Poles rose once again in a new one. Among them, Antoni son of Karol, was executed by Russian side in Volhyn Ukraine where family fought against Russian authorieties both during the time of Tsar and Sovjet Union. His brother Stanisław was sent to Syberia.

Wincenty Danilewicz (1787–1878) received French Order of Legion of Honour and [Saint Helena Medal. He took part (among others) in The Battle of Arcis-sur-Aube (20–21 March 1814), where he was wounded.

At the end of 19th century, the family was divided into three lines; the Prussian, Lithuanian-Belarus and Volhyn line. In total, 26 males (Danielewicz) was found registered nobility of the Ostoja Clan. All members of the Volhyn line of Ostoja-Danielewicz was excluded from Russian records after taking part in upraisings and being members of opposition i favour of Poland. 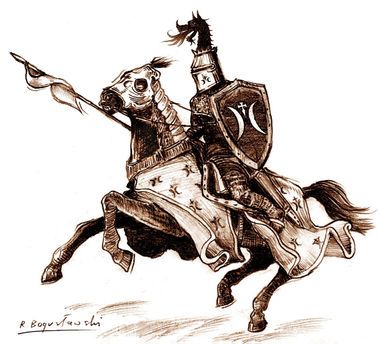