Hall of Fame and Remembrance 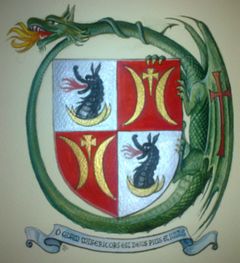 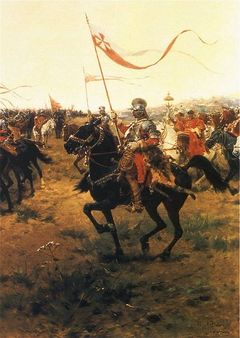 There are many to remember and there are many of Ostoja's that served Poland in exceptional way. Each Ostoja family have their own heroes, here below are those that we all should remember as they represent all that the Clan of Ostoja was in the past and will do so in the future.

In the year of the Lord 1270, legendary doughter to castellan Piotr Krepy that was defeated and killed by Tatar's during their invasion, succeeded to fool and trap Tatars in their next attempt to burn down Sandomierz and, scarifying own life for the Town and the people.

The Duke of av Lviv 1370, created great line of the Clan of Ostoja.

The Lord of Regality of Inowrocław och Krzepice and comes urbis of Wielun. Legendary Knight in the Castel of Bleszno.

Greatest Lord of Ostoja in the medieval time, the Duke of Transylvania, Prince of Halicz, Palatine of Trencin, Nitra and Bratislava, Lord of 31 castles and around 300 proprieties, altogether half of western Slovakia, Lord and owner of whole 406 km long river Vah. Great general and diplomat, saved Poland during the time of war with Teutonic Knights. Richest and most influential person in the history of the Clan of Ostoja and also one of the richest and most influential persons in Polish history. Read more

Together with Duke Jan of Jani of Ostoja and Duke Nikolaus Szarlejski de Stiboricz formed coalition to win the stronghold of Malbork (Marieburg) for Poland. Great diplomat, Lord of Greater Poland, Lord of Regality of Malbork.

In coalition with Jan of Janie and Stibor of Poniec in order to break down the dominance of the Teutonic knights in Pomerania. Duke of Inowrocław, Kujavien and Brest, Lord of Regality of Bydgoszcz, Gniewkowo and many others. Supreeme commander of Polish army in Prussia. Count of Tuchola adn Brodnica. The last from main line of the Kujavian Stibor dynasty.

From 1486 owner of legengary Bobolice stronghold that remained in the hands of the family until year 1625.

The Princes Szyszkowski of Ostoja

Biskop and prins of Warmia (Ermland).

General of artilery, engineer. Know in Europe for Artis Magnae Artilleriae that during 200 years was used as manual in all of the Europe.

Origin from one of the greatest and wealthiest families of Lithuania, most powerfull and richest woman in the Commonwealth, one of the most powerful women in Europe then and in the history. One of the reasons of the Polsih-Swedish war commonly named "Potop" - the Deluge.

General of the Kościuszko forces in Sandomierz.

Generals of Royal Army in the partition of Commonwealth

Famouse poet and etnograph in Belarus

The Priest that organized the Uprising in Sandomierz against Russian Empire.

Professor and master of Jagellonian University

Professor of art in Jagellonien University in Krakow

Ladies of Ostaszewski family during Uprisings

Bishop of Przemyśl and professor in University of Lviv. Read more - Czytaj więcej

Army General that fought for the independence of Poland.

Bronisław Bohatyrewicz (1870–1940) - military commander and a general of the Polish Army. Murdered in Katyn. Bohatyrewicz was one of the two Generals whose bodies were identified during the 1943 exhumation. Kazimierz Suchcicki of Ostoja (1882-1940) was also general that died in Katyn same year. Read more - Czytaj więcej

Bracia Słońscy - Słoński brothers, officers of RAF (Royal Airforce). Three brothers that all where shot down and killed during WW2 in service for Poland and fridom.

Master spy during WW2 under the pseudonim Marie Springer, her work led to localisation of German battleship Tirpitz.

Professor and scienties for development of agriculture.

Pioneer and photographer, widely known in the world for exceptional documentation of lost african tribes.

Widely known poet in Ukraina, loved by the people, national monuments in Kiev.

Zbigniew Ścibor Rylski (born 1917) - General, officer of Warsaw Uprising during WW2 and Andrzej Zagórski (1926–2007) that wrote around 250 books about the resistance during WW2, officer in Polsish army (AK)