Wincenty Danilewicz (1787–1878) – born in 1787 in Minsk Lit. (former Polish–Lithuanian Commonwealth territory), was involved – as light-cavalryman – in the Napoleonic campaign, for which he was awarded the French Order Legion of Honour (Polish) and Saint Helena Medal. He took part (among others) in The Battle of Arcis-sur-Aube (20–21 March 1814), where he was wounded. 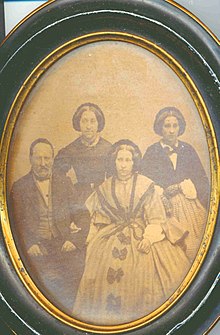 He was member of famous 1st Polish Light Cavalry Regiment of Imperial Guard.

The Regiment fought in many battles, distinguishing itself at Wagram, Beresina, Hanau and especially Somosierra. On at least three occasions, light-horsemen of the Regiment saved Napoleon's life. All members of the Regiment where Polish noblemen. The regiment consisted of 60 officers and about 1000 men. The regiment was loyal to the Napoleon to the very end and followed him back to Paris.

In the times of the Second Polish Republic the traditions of the 1st Regiment were maintained by 1. Pułk Szwoleżerów Józefa Piłsudskiego, an exclusive regiment of cavalry, the 2nd squadron of which was traditionally the Service Squadron for the president of Poland.

In 1815 Wincenty returned home, and started to work as a secretary of Chancery (medieval office) of Senate of Poland in Congress Poland. Then he worked in the archive of heraldy administration of Congress Poland in Warsaw. He retired in 1844.

Later in his life, Wincenty Danilewicz moved to Jędrzejów. Afterwards he ran the literary production i.e: "three tragedies" and the opera buffa. His great-grandson Maciej Masłowski wrote (1957), that in Wincenty testament (1859) thirty volumes of his memoirs are also mentioned.

Wincenty was married to Franciszka Grunwald and they had a daughter, Waleria Józefa Katarzyna 1827-1869) that married Rajmund Masłowski (lawyer). Together, they had a son Stanisław Masłowski, great Polish painter. Masłowski family belonged to Clan Samson (Samson CoA).